A roof’s ability to bear a heavy load usually depends on its thickness. Since it is the only thing that keeps your loved ones and valuables from getting wet when it rains, your roof should be adequately thick to stay in good shape, no matter what Mother Nature throws at it. 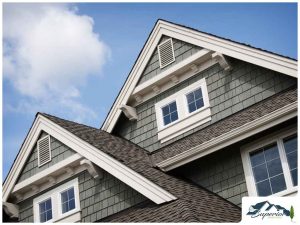 Achieving the ideal roof thickness is anything but straightforward. There must be a proper interplay among certain elements to render a roofing system sturdy for decades.

A roof can only be as thick as its trusses allow it to be. There are no universal dimensions for trusses, for their size depends on the specifications of a roof. Unlike rafters, these framing members are specially engineered to support greater heft with less material. To put things into perspective, two-by-four foot trusses could match the load-bearing performance of two-by-six foot and two-by-eight foot rafters.

In general, the plywood or oriented strand board (OSB) sheets of the roof sheathing should be at least half an inch thick to bear the weight of the popular products without increasing the likelihood of frequent roof repair projects.

However, decking boards must increase in thickness when a heavier roofing material is used. If the sheets that comprise roof sheathing are less than 5/8-thick, they might eventually sag while carrying the massive weight of slates or tiles.

As mentioned, the weight of a covering directly affects the thickness of a substrate. If you want to switch to a heavier material, your engineer may require drastic structural modifications to comply with the building code.

Entrust your project to Superior Roofing to ensure that your roof is thick (and tough) enough to withstand the rigors of nature and other threats. Call us at (334) 468-5611 now to get your free estimate in Phenix City, AL.